I’m always looking to sharpen my brain. Somewhere along the line growing up, I remember hearing “treat your brain like a muscle and make sure it gets exercise.” For whatever reason, that stuck with me and I have tried to make reading my daily “brain work out.”

Whenever I exercise my body – which isn’t as often as I should – I usually incorporate some sort of pre-workout or protein supplement.

It was in college that I heard about nootropics a.k.a. supplements that supposedly enhanced a person’s cognition. This sounded cool. The idea of amplifying my mind’s strength had me intrigued but I did have my doubts. Upon researching, it became clear that the general consensus for the most part was that these smart drugs were legitimate. Naturally, my curiosity got the best of me, and I gave them a shot. I’ve been a supporter ever since.

Below, I’ll provide a thorough Genius Consciousness review. I want to state now that I have actually purchased this product and used it in its entirety. 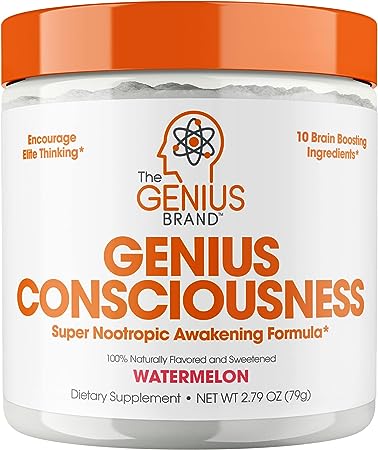 Buy On Amazon
By clicking this link and making a purchase, we may earn a small commission.

About The Genius Brand

The Genius Brand was founded by Robert Oliver with headquarters in Alpharetta, Georgia. Their slogan reads, “Optimize Everything.”

From their site, “The Genius Brand was born with an emphasis on science and complete disregard for standard profit margins.” That sentiment is somewhat reflected in the price of their products. When compared to some of their primary competitors, they price lower.

A main staple of The Genius Brand promise is: No Fillers. No Dyes. No Artificial Flavors. They go on to commit to making products without proprietary blends, artificial dyes, artificial flavors, artificial sweeteners, unnecessary fillers, or banned substances. Quality ingredients are something that the Genius Brand no doubt takes very seriously.

Genius Consciousness is actually a mix of different nootropics rolled into one. It comes in powdered form, and the consumer can choose from two different serving sizes: 1/2 scoop (2.6 grams) or 1 full scoop (5.3 grams).

Here are the supplement ingredients as listed on the label:

The 6 key ingredients in Genius Consciousness are:

Each of these plays a critical role in the cognitive enhancement and energy boosting properties that Genius Consciousness provides.

Alpha Size is important as it markedly increases acetylcholine (AC) levels in the brain. In short, AC helps regulate cholinergic areas. These play a role in memory, arousal, motivation and attention. This is a big one for the memory boost feature that Genius Consciousness advertises.

SerinAid contains PhosphatidylSerine which plays a key role in keeping your mind sharp. This fatty substance acts to protect brain cells and transmits messages between them. Studies have shown that as humans age, natural phosphatidylserine levels can decrease and as a result, slow down memory. It isn’t validated by the FDA, but there have been studies that show SerinAid can help with mental performance as a whole.

NeuroFactor is an interesting compound derived from the Coffea arabica plant. It increases Brain-Derived Neurotrophic Factor, otherwise known as BDNF, a neuroprotein critical to memory and brain functionality.

Dynamine is a uric acid xanthine derivative. Xanthine is a family of compounds that has caffeine under its umbrella. This composite is known to deliver a “clean” energy burst without any jitters. It assists in activating dopamine receptors to help with spatial working memory. The combination of dynamine and caffeine is a very common blend.

Lions Mane is a medicinal mushroom that belongs to the tooth fungus group. It has many different uses and can possibly aid in the improvement of mild cognitive impairment. Beyond that, the mushroom helps with digestive health by reducing inflammation as well as nervous system cells to repair at a quicker rate.

Caffeine is by far the most common central nervous system stimulant in the world and is found in more than 60 plant species across our planet. Genius Consciousness caffeine comes from the Coffea arabica plant. The interaction of caffeine with the above named ingredients serves to enhance the effects of each particular substance.

In theory, all the above-named compounds work in unison to achieve stronger activation of neurons that enhance a person’s memory, concentration, learning, recall, mood and focus. The combination of these essentially serves as a powerful “stack” that optimizes a person’s mind.

How Is The Taste?

The taste of Genius Consciousness is relatively good. However, anytime you are drinking chemical compounds that aren’t intended for flavor first, you have to go into the experience knowing that your taste-buds will not be fully appeased.

I purchased the watermelon flavor and can confirm that the taste does have a slightly sour side, but overall pretty satisfying. I did expect a bit of roughness going in, but was pleasantly surprised with the flavor. As there are no added artificial sweeteners, I was pretty impressed with how drinkable the nootropic was. Also, there is a minimal aftertaste.

How Long Does Genius Consciousness Last?

The effects of Genius Consciousness last for a considerable time. A full serving should energize you for about 4-6 hours. When I was taking this nootropic, I would typically ingest every morning at about 7:30 a.m. At around 8:30 I would follow-up with a cup of coffee and some sort of healthy breakfast. Even before hitting the coffee, I could feel the stimulation of compounds hitting my brain. After approximately 30 minutes, I felt a “buzz” of energy and my general environmental awareness seemed to increase and I felt sharper than normal. I answered questions quicker, responded more acutely to emails and overall felt like I had more control over my day. It wasn’t until around noon or 1:00 that I could start feeling the effects wear off.

The price is competitive, but definitely not cheap. The adage “you get what you pay for” rings true here. The company uses quality products and as such, the cost of the nootropic is higher than some other brands available. That said, it’s definitely not outrageous. You’ll find a 79 gram product available for $37.99 on Amazon. This breaks down to about $2.54 per serving, lower than the cost of most energy drinks on the market.

In general any sort of stimulating substance will have side effects. Acetyl-L-Carnitine, Alpha-GPC, L-Tyrosine, and Caffeine are all substances featured in Genius Consciousness. Some of the known possible side effects of these particular ingredients are nausea, headaches, skin rash and gastrointestinal issues. Those are the worst-case scenario and present on nearly all warning labels for any nootropic containing said compounds. During my experience, I did not encounter problems with any of these known side effects. With that said, it is always best to consult a physician prior to ingesting compounds that your body isn’t familiar with.

This is one Genius Consciousness review among many online. What I can say about this one is that I have tried the product and taken the entirety of the container. On the whole, I was highly impressed with Genius Consciousness. It works quickly and is one of the more noticeable nootropics I have ever taken.

Please remember that this review is not intended to serve as medical advice. I am not a doctor and am not offering any sort of medical recommendation. This review is meant to be an honest, informative look based on personal testing. Hopefully, this Genius Consciousness review has been educational for you. If you have tried it yourself or have any feedback, please leave a comment.